Sensing the threat Donald Trump’s candidacy poses to down-ballot Republicans, David and Charles Koch are renewing their focus on buying influence in Senate and House races. The Koch network is planning on directing their $900 million war chest to a spring offensive of ad campaigns targeting Democratic challengers and propping up Republican incumbents.

The Kochs motive for supporting legislative candidates is not based in altruism: they expect results. From Rob Portman’s support of policies that encouraged outsourcing and corporate inversions to Kelly Ayotte’s votes against increasing the minimum wage while voting to preserve tens of billions of dollars in tax breaks for big oil companies, The Koch’s politically corrupt quid pro quo requires unwavering support for their agenda in return for financial support.

The Kochs are investing heavily in their legislative insurance plan. No matter who wins the White House this November, the Kochs primary concern is protecting their hand-picked legislators as […]

Another week, another spate of formulaic, inaccurate op-eds disseminating from the Koch network.

The Kochs have a well-documented history of pushing boilerplate-style op-eds and letters to the editor to deceive readers into the belief that local, grassroots support exists for Koch policies. The Koch network has previously used this tactic to attack occupational licensing–a campaign which saw editorials in 36 states–and earlier this month used the same tactic in an attempt to undermine carbon regulations.

The Koch brothers have been involved with Libertarian causes for decades, ever since David Koch discovered a campaign finance loophole that would allow him to donate unlimited sums of money to a political candidate, so long as he was on the ticket. So he bought himself a $2 million spot on the Libertarian party’s 1980 ticket as the VP candidate, running on a platform of extreme deregulation, which would benefit Koch Industries and further line the brothers’ pockets. Fast forward to 2015, and the brothers are sponsoring a bizarre Libertarian movement in New Hampshire aimed at taking over and demolishing the state government.

The Free State Project‘s goal is to move 20,000 libertarians to the state and effectively overrun the state government and possibly even secede from the United States. Despite its extreme rhetoric, the Free State Project has deep connections to the Koch brothers. The New Hampshire chapter of Americans for Prosperity, the […]

The state of the union between the Koch brothers and Scott Brown was strong years before Brown moved to New Hampshire to run for Senate. In 2011, Brown was caught on tape kissing the ring of David Koch, gushing that “your support during the election, it meant a ton. It made a difference and I can certainly use it again.” Since then, Koch-backed groups have doubled down on their support for Brown, spending over $2.6 million on ads attacking his opponent.

As billionaire businessmen, the Koch brothers know a thing or two about making sound investments, and Scott Brown has clearly demonstrated to the Koch brothers that he will represent their interests again if they help him return to the Senate. Brown has voted for tax breaks for oil companies, surely music to the ears of oilmen like the Kochs. The fact that after losing his Senate seat in 2012, Brown gladly […] 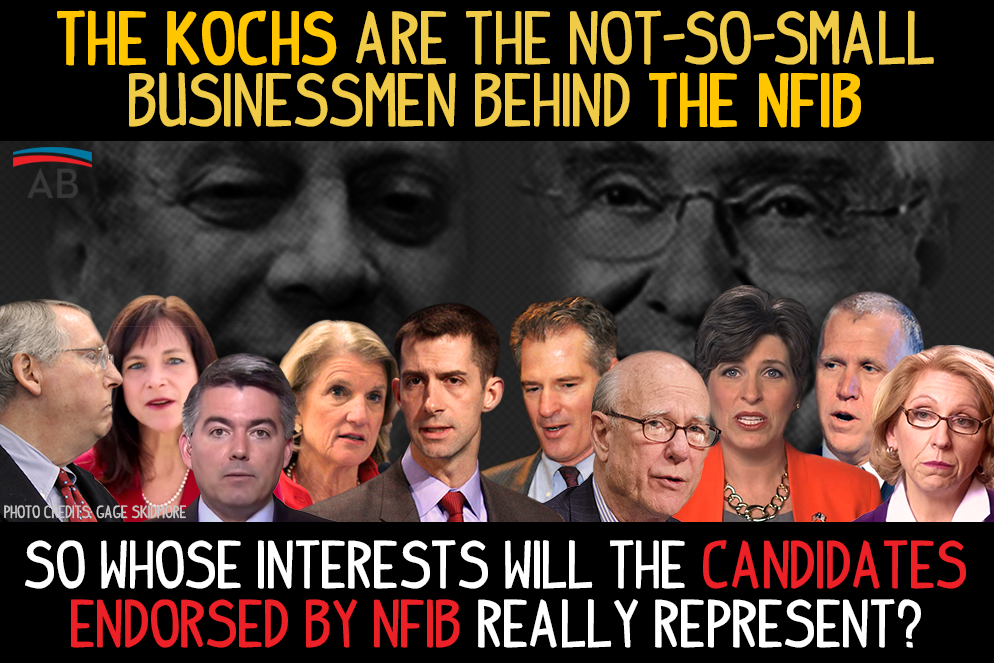 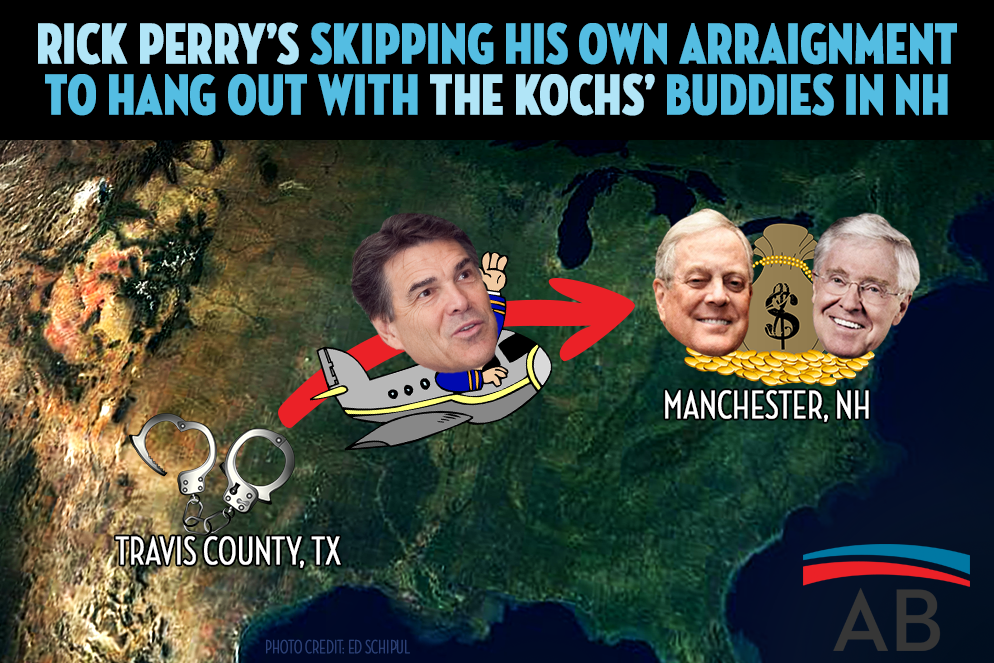 Rick Perry was due to appear in court in Texas today for the formal reading of his two felony charges after being indicted for an abuse of power. But Perry thought to himself, why waste time at my arraignment in Travis County when I could be flying to New Hampshire to appear at an event with the Koch brothers’ Americans For Prosperity?

That anyone could think Rick Perry might be able rehabilitate his image to the point of being a viable presidential candidate in 2016 is stupefying. Perry’s 2012 campaign went down in flames, and since then, he’s compared homosexuality to alcoholism and been indicted on multiple felony charges. But clearly Perry is still eying that impossible comeback, because YOLO.

Why else would Perry, the governor of Texas, be flying to New Hampshire to stump with Koch cronies about the state’s business tax rate? The trip highlights Rick Perry’s Tea Party priorities, for sure. But worse, it’s yet another indicator […]

Nothing says “I’m a strong independent-minded leader” like signing a sweeping pledge of allegiance to the Koch brothers.

The Concord Monitor reports that Republican state candidates across the board in New Hampshire have signed an Americans for Prosperity pledge that includes among other things, opposition to Medicaid expansion, which has already expanded health care access to 50,000 Granite Staters, and support for legislation to limit collective bargaining and further strain working families.

Already, the Kochs’ AFP has shown that the pledge is no joke — they have sent out mailers attacking two Republican state senators in New Hampshire who signed last year’s pledge, but then voted for Medicaid expansion and a tiny increase in the gas tax to fund crucial infrastructure projects.

Republicans in New Hampshire stood proudly with AFP’s NH director as they signed over their voices to the Koch brothers. And one of the two Republican […]

Get a load of this: the Koch brothers are attacking League of Conservation Voters, claiming they’re a “partisan activist group that does not disclose its donors.” Seriously. Yes, those Kochs; the ones who plan to spend $500 million to buy midterm elections for Republicans through their various dark money political entities.

It’s not surprising that the Koch brothers are especially irritable when people hold their favorite son, Scott Brown, accountable. Everyone is overly protective of their own. But this line of attack is beyond parody.

The Kochs go on to assail LCV’s ad for representing them as self-interested, out-of-state oil billionaires who have fought to protect oil tax breaks. But if the shoe fits…This comes from the Center for […]