Over the last week, the Kochs’ millennial-outreach front group has placed generic anti-Social Security op-eds in newspapers across the country, including in Colorado, Missouri, Florida,Oklahoma, and Mississippi.

“Social Security’s math no longer works”;
“Millennials are out of luck”;
“This is a full brown crisis”; and, last but not least,
“Social Security is an unsustainable relic of a bygone era that threatens to take us down with it.”

Beyond the op-ed campaign, the Koch group has similarly exposed its mission to destroy Social Security by promoting grassroots campaigns “petitioning” and “tabl[ing]” for “#liberty and #SocialSecurityReform.”

Previously, the group’s resorted to violent imagery to fearmonger over the supposed Social Security “crisis,” tweeting out the image of a a young professional being held up with a gun to […]

Out of options, the Charles and David Koch-backed Club for Growth just endorsed settled for Ted Cruz. The Kochs have for months been agonizing over the reality that they can’t buy Republican presidential frontrunner Donald Trump’s loyalty with campaign contributions. Hoping that someone — anyone — other than Ted Cruz would emerge as a viable challenger, Charles and David have thus far held off from getting involved in the race. Now, it looks like they’re settling — and hoping that they can somehow get Cruz into the White House where he’ll be sure to advance their selfish agenda. 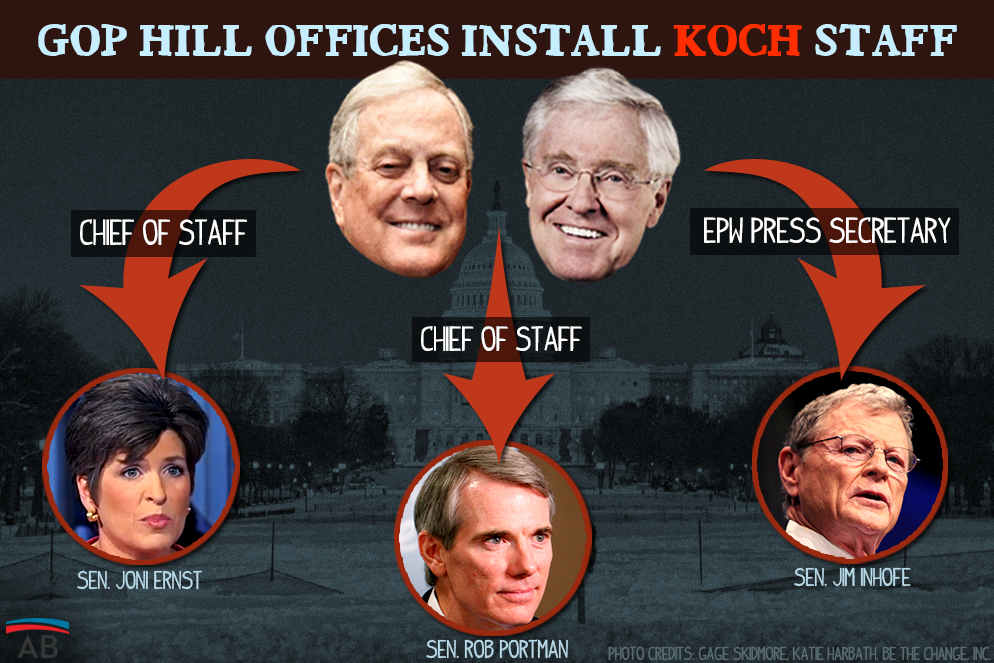 We have even more development in the never-ending shuffling of staffers between Koch-backed groups and official Republican posts on the Hill!

This week, Jim Inhofe — who has literally written a book called The Greatest Hoax: How the Global Warming Conspiracy Threatens Your Future — officially assumed his post as chairman of the Environment and Public Works (EPW) Committee. That meant he had to name his staff hires, and fittingly, he named a staffer from the Koch-backed group Generation Opportunity as the EPW press secretary.

It makes a lot of sense if you think about it. The Koch brothers have spent tens of millions of dollars funding climate change denial and continue to fight tooth and nail against taking any action address it. Inhofe has dedicated a great deal of his public life trying to discredit climate science. So best to hire your spokesperson straight from the Kochtopus.