Another week, another spate of formulaic, inaccurate op-eds disseminating from the Koch network.

The Kochs have a well-documented history of pushing boilerplate-style op-eds and letters to the editor to deceive readers into the belief that local, grassroots support exists for Koch policies. The Koch network has previously used this tactic to attack occupational licensing–a campaign which saw editorials in 36 states–and earlier this month used the same tactic in an attempt to undermine carbon regulations.

Jane Mayer’s new book Dark Money brought us some pretty mind-blowing revelations about Charles and David Koch and their family history — like that their father, Fred Koch, helped build a Hitler-approved oil refinery in Nazi Germany that was later bombed by the Allies and rebuilt using concentration camp slave labor.

Here’s another more recent, but nonetheless fascinating, blast from the Kochs’ past: Back in 2011, Charles and David Koch aggressively courted New Jersey governor Chris Christie to run for president as an “empathetic,” Koch-friendly alternative to Mitt Romney.

Chris Christie has gone on the record to throw some love the Kochs’ way, defending the brothers and the influence of their and others’ dark money spending and negative ads back in 2014. But Mayer’s new book reveals that the Koch-Christie affinity and admiration was mutual — and that it goes back even further.

In 2011, with polls showing Mitt Romney struggling with a perceived lack […]

Chris Christie once bragged that he would be “New Jersey’s No. 1 clean-energy advocate,” according to the Washington Post. But once he had a series of meetings with the Koch brothers and other Republican donors, he changed his mind and went to work on behalf of the Koch’s fossil fuel interests rather than the people of New Jersey.

Christie went back on a pledge he made to his state so he could remain in good graces with the Koch brothers. In 2010, he touted plans to build a wind farm off the Atlantic City coast. Soon after, the Koch brothers came calling and Christie began fighting wind energy proposals. Unfortunately for Christie, ignoring New Jersey has left him in “political free fall” back home – and unpopular on the national stage as his pre-presidential campaign sputters.

The Koch brothers have a long history with Chris Christie. Last year, his Board […]

The third time isn’t always the charm. For a third time, Chris Christie’s Board of Public Utilities has rejected a proposal to build windmills near Atlantic City in order to generate renewable energy. It turns out that the infinite checkbooks of the Koch brothers are more charming than the proverbial ‘third time.’

Immediately after Christie’s Board of Public Utilities once again shot down the promising project, the Koch brothers’ Americans For Prosperity issued a press release praising the energy regulators for their decision. In said press release, they do their best to dress the energy plan up in scary clothes, applauding the BPU for “rejecting this misguided offshore wind scheme.” Amazingly, later in the release, they point out that New Jersey’s job market continues to be lackluster, losing 4,500 jobs in October, while disregarding the renewable energy jobs this project would create. 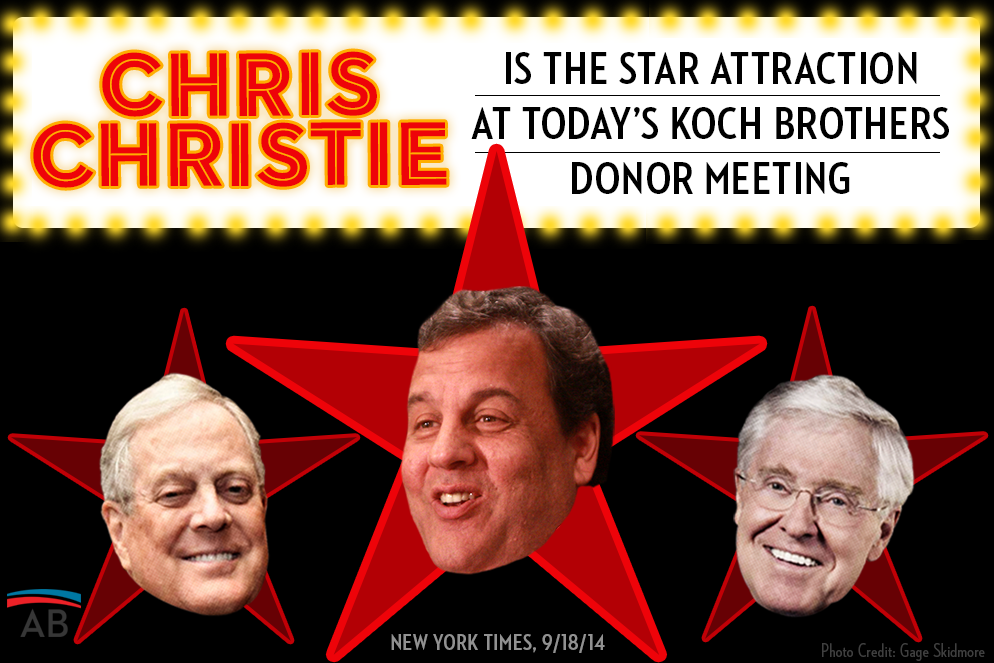 In the ongoing Pursuit of Koch race being run by 2016 GOP presidential hopefuls, it appears Chris Christie is making his move. Already in recent weeks, we’ve seen Rick Perry traversing the country to court their favor. Ted Cruz joined them for a national chat session. Mike Pence got his own POLITICO story on his love affair with the Kochs. And the three of them were joined with fellow 2016 wannabes Rand Paul, Bobby Jindal and Ben Carson to “defend the American Dream” with the Koch brothers’ Americans for Prosperity.

Well Chris Christie, being the insanely ambitious lackluster governor he is, isn’t going to miss out on the opportunity to get a crack at the new power brokers of the GOP and their treasure chest. In a piece about Christie’s utter and proud refusal to tackle climate change, Coral Davenport at the New York Times reveals that Christie […]

Americans for Prosperity’s New Jersey chapter is pressuring lawmakers in the state to vote down Senate Bills S1952 and S779, which would create tax incentives for the film and television industries to do business in the state.

If you’re wondering, “where have I heard this before…?” the answer is North Carolina. The Koch brothers-backed group recently launched an ad campaign opposing the renewal of the Tarheel state’s existing film tax incentive program. Proponents of the tax credits in both states point to the jobs and economic benefits created by the film industry.

About New Jersey’s proposed tax incentives, AFP laments that they’ve “seen this movie before, and it’s a flop.” Interesting choice of metaphor from a political outfit that is mounting the same exact campaign in at least two different states at the same time. At this rate, AFP and the Koch brothers’ tirade against film tax credits is poised to have more […]