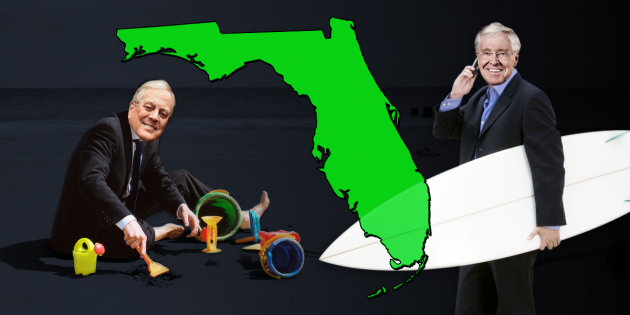 Through their decades in business and politics, Charles and David Koch have honed their methods for rigging the system in their favor, both through their national operations and activities. Their history in Florida is indicative of this overall multifaceted strategy, which includes lobbying and raising funds for politicians, using their advocacy network to sway public policy, and leveraging financial donations to universities to buy professors that promote their worldview. Time and time again, the Koch brothers’ self-interested actions proved to be beneficial to their bottom line at the expense of hardworking Floridians.

One key aspect of the Kochs’ strategy was cultivating relationships with high-profile Florida politicians who were sympathetic to their message. Senator and likely GOP presidential candidate Marco Rubio was the only U.S. Senator to receive a 100 percent score from Koch-group Americans for Prosperity in 2013. In that same year, Sen. Rubio was the keynote speaker at […]

The Florida chapter of David and Charles Koch’s primary political front group, Americans for Prosperity, is being hailed as a “winner” of Florida’s 2016 legislative session. Victory for the Kochs almost always comes at the cost of average working Americans, and this time is no different. Wielding their political power over the Florida legislature, the Kochs successfully denied 1.1 million Floridians health insurance when they blocked Medicaid expansion in 2015. At the beginning of the 2016 session, AFP kicked off another round of “accountability” mailers to lawmakers — bullying their way to victory.

State director Chris Hudson called on lawmakers to “commit themselves to pushing free-market health care reforms that will yield more positive results for Florida’s most needy.” Predictably, significant reforms to Florida’s broken healthcare system failed to come to fruition during the session. AFP’s opposition to Medicaid expansion–coupled with its failure to provide […]

Over the years, Florida State University has become a playground for the Kochs to test out the limits of the influence their grants can buy at public universities. FSU students have fought against the billionaire brothers through “UnKoch My Campus” campaigns that highlight the consequences of the college accepting Koch money. Despite these initiatives, the Kochs have still been able to successfully buy their way into public universities across the country, bookbags packed to the brim with Ayn Rand and John Stossel.

At FSU, the installation of Koch crony John Thrasher earlier this year was a big win for the brothers. Now, another Koch favorite, Mark Zupan, is up for the job of provost.

In an opinion piece in the Tallahassee Democrat, Ralph Wilson reports:

Provost candidate Dr. Mark Zupan is the director of the Bradley Policy Center. The namesake refers to the Bradley Foundation, […]

Today, the Florida Supreme Court begins hearing oral arguments on the solar power ballot initiative. Leading the charge against the initiative that would give homeowners the right to choose solar power are — you guessed it — the Koch brothers. Koch-backed groups 60 Plus Association, the National Black Chamber of Commerce, and Americans for Prosperity have all been working against the expansion of solar and pushing for more regulations in the state.

Today’s hearing is a reminder that despite their claims of wanting less government interference, the billionaire brothers are more than willing to push more regulations if it helps their bottom line.

Read more of our coverage on the Kochs’ hypocritical opposition to solar power, particularly in Florida.

In The Shadows: Kochs’ Hypocritical Attacks On Solar Power

Today, the Obama administration is rolling out new solar power executive actions. The National Journal reports that the White House is working with the private sector […]

The Koch front group, Concerned Veterans for America (CVA), is touring through Florida over the next three days to push the brothers’ particular brand of extreme conservatism. While the shady group likes to claim it helps vets, it supports policies that do just the opposite. Hoping to expose their real political agenda, Bridge Project and VoteVets.org have teamed up and released a report on CVA titled, “The Vets Group That Fights Against Veterans.”

CVA promotes extreme right-wing policies that stand in opposition to nearly every other veterans group, as reported in the Military Times.

From pushing a plan to privatize the VA healthcare system to proposing a transition from the current military retirement system to a private 401(k)-like plan, CVA follows the radical conservatism of the Koch brothers, working to advance the billionaires’ self-interest at the expense of veterans.

To be fair, Florida Republicans probably saw this coming. Americans for Prosperity is targeting 25 state senators for supporting Medicaid expansion that would provide 800,000 Floridians with health care. In response, one Florida Republican recently called out AFP in a hearing, saying, “Obviously you’re for prosperity for yourself and not anyone else … You people serve absolutely no purpose.” Others are trashing AFP’s motives and attempts to deceive voters.

Nationally, the Kochs are trying to get ahead of their problems with state Republicans bucking their agenda by holding auditions for the top GOP presidential contenders for a share of the nearly $900 million they’re spending this election. The Kochs have

The Kochs have been leading the conservative pack in trying to unravel the benefits from ACA, starting as early as 2010 when the Koch-bankrolled American Enterprise Institute began developing their legal theory. One of the speakers, who worked at the Competitive Enterprise Institute (another Koch-funded group), went so far as to say, “This bastard has to be killed as a matter of political hygiene.” The Nation reports that the Kochs are responsible for more than half […]

Looks like our year-long effort to raise awareness about the Kochs’ moneyed special interests hit a nerve. This month alone, Bridge Project has released reports on the Kochs’ efforts in Florida and Iowa as well as their harmful LIBRE Initiative as part of our “Month’s Supply of Koch.”

For years now, the Koch brothers have been providing grants to universities with stipulations attached to manipulate the curriculum and teaching professionals at each institution — […]

This week the Kochs were vilified in a Gainesville Sun editorial for their greedy efforts to stave off threats to their oil and gas empire. The paper blames Americans for Prosperity, the Kochs’ political arm, for an obscure regulation that limits the expansion of solar power in the Sunshine State.

Florida is one of five states that has a law on the books prohibiting residents from selling power from solar panels installed on homes or businesses — instead consumers can only buy electricity directly from utilities. The Gainesville Sun pins the ban on AFP’s intense lobbying efforts to protect their fossil fuel fortune. The paper points to overwhelming evidence that the expansion of solar energy would save money, reduce fossil-fuel emissions, and create jobs.

Time and time again, the Koch brothers’ self-interested actions proved to be beneficial to their bottom line at the expense of hardworking Floridians. As part of the mandate to expose […]