If the Koch brothers win,
working families lose.
The Koch brothers are trying to buy the mid-term elections to drive their self-serving agenda. Help us hold them accountable this year and beyond.
Real Koch Facts
Business Impact
North Carolina
Policy Agenda
Louisiana North Carolina Wisconsin
Over the years, Florida State University has become a playground for the Kochs to test out the limits of the influence their grants can buy at public universities. FSU students have fought against the billionaire brothers through “UnKoch My Campus” campaigns that highlight the consequences of the college accepting Koch money. Despite these initiatives, the Kochs have still been able to successfully buy their way into public universities across the country, bookbags packed to the brim with Ayn Rand and John Stossel.
At FSU, the installation of Koch crony John Thrasher earlier this year was a big win for the brothers. Now, another Koch favorite, Mark Zupan, is up for the job of provost.
In an opinion piece in the Tallahassee Democrat, Ralph Wilson reports:
Provost candidate Dr. Mark Zupan is the director of the Bradley Policy Center. The namesake refers to the Bradley Foundation, one of many foundations co-funding the Koch network’s political machinery (State Policy Network, ALEC, Donors Trust, etc.), seeking to “leverage science and universities” for political gain.
More specifically, though, the Bradley Foundation has spent more than $31 million funding the charter school movement. Zupan’s publications contain a broad enthusiasm for privatization, particularly charter schools. Though not widely publicized, FSU received a $250,000 state appropriation for Thrasher’s pet project, the Florida Institute for Charter School Innovation. It would appear that mass privatization, and Thrasher’s project in particular, conflicts with the mission of a public university.
President Thrasher has already proved he will put the Kochs’ interests ahead of students. But even before that the brothers’ money was able to help them get what they wanted. In 2009, the brothers even had say over faculty hires, rejecting nearly 60 percent of suggestions during the process. 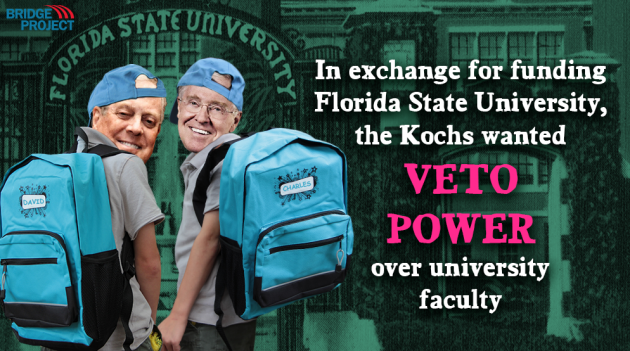 In his op-ed, Wilson writes, “For how severely FSU’s integrity has been damaged by its political affiliations, it will be interesting to see whether John Thrasher can prove that his administration is not another Koch front.” That will be hard to prove indeed, especially considering the Bradley Foundation alum, Zupan, seems to be a shoo-in for provost.
Read more about the Kochs’ influence over Florida State University here.
Related Posts