If the Koch brothers win,
working families lose.
The Koch brothers are trying to buy the mid-term elections to drive their self-serving agenda. Help us hold them accountable this year and beyond.
Real Koch Facts
Business Impact
North Carolina
Policy Agenda
Louisiana North Carolina Wisconsin
With the Koch brothers’ Americans for Prosperity Defending the American Dream Summit in Orlando this weekend, Bridge Project is today releasing an updated Florida research report exposing the Koch brothers’ subversive political activities in the Sunshine State.
As ever, the Koch brothers will be promoting their selfish agenda and flaunting the loyal politicians they’ve bought-off to promote it.

Front and center on Saturday will be a Koch favorite: Marco Rubio, who the Kochs have admired for years. Charles and David Koch have painstakingly made a loyal foot soldier out of Rubio, who has earned a 100% lifetime rating from AFP — and the billionaires be doing everything they can to make sure they get their Florida man back in the Senate this fall.

“Marco Rubio avoided Trump’s Republican Convention like the plague, but he is beyond eager to meet with the out-of-state oil billionaire Koch brothers at the Americans for Prosperity summit this weekend. The Kochs have bought their way into Rubio’s orbit with more than $5.4 million from their network and in turn, Rubio follows their lead on policies that hurt Florida but benefit the Kochs’ bottom line. Rubio consistently puts his big donors and self-serving political interests, like strongly supporting Donald Trump, ahead of what’s best for Floridians.”
Read the full report here: 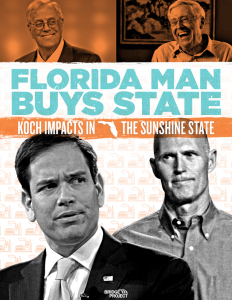