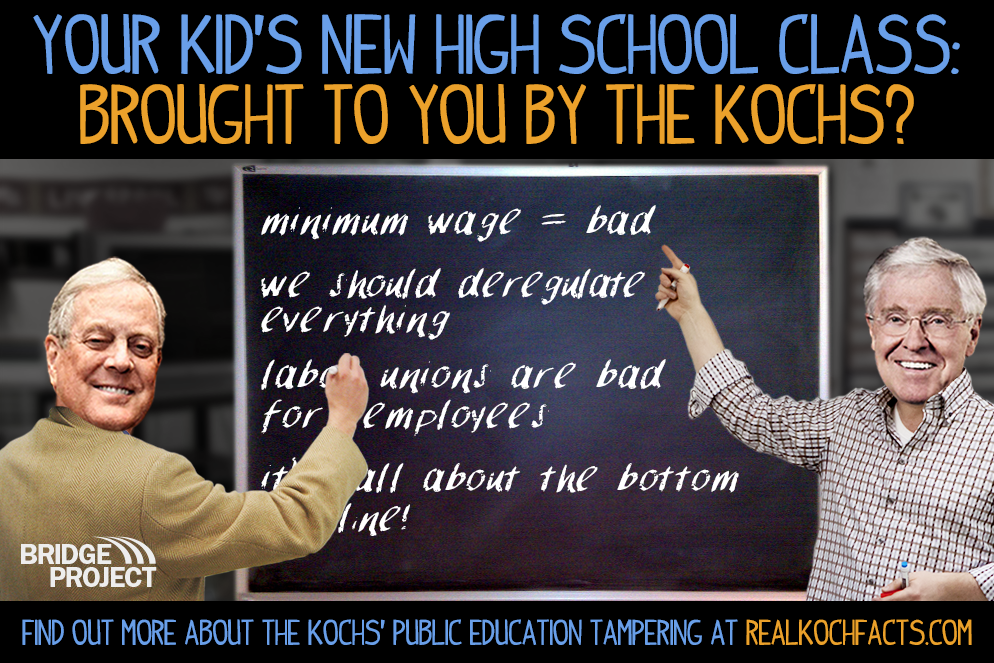 Last week, we examined Generation Opportunity, the Kochs’ efforts to indoctrinate college students using keg parties and creepy carnivals. Turns out, for the past several years, the family — led by Charles G. Koch — has been endeavoring to start this process even earlier, with high school students. According an exhaustive report from the Huffington Post, since 2009, the Kochs and their allies have been using a program called Youth Entrepreneurs to “impart Koch’s radical free-market ideology to teenagers.” The report estimates that the initiative reached about 1,000 Kansas and Missouri students last school year.

Where Generation Opportunity’s gambit is creepy and ridiculous, the strategy and execution of Youth Entrepreneurs is subversive and unsettling. The classes are seemingly similar to a high school business course, but teachers receive training at Koch Industries’ headquarters, use class materials created by Koch-funded think tanks and are even required to read Charles’ book, according to the Huffington Post. Some of the messages teachers are expected to convey include “the minimum wage hurts workers and slows economic growth,” “low taxes and less regulation allow people to prosper” and that “government, in short, is the enemy of liberty.” All extreme stances espoused by the Kochs and their political arm, Americans for Prosperity.

Like any other Koch effort, Youth Entrepreneurs’ primary instrument of persuasion is money. The article notes that in order to recruit students into the class and to participate in related activities, YE promises scholarship money after graduation or potential funds for a start-up venture. Moreover, according to the Huffington Post, the program deliberately targets at-risk youth in underfunded schools, where students, teachers and administrators alike are unlikely to be in a position to turn down free support or resources. The tactic is even more craven when considered with the Kochs’ stance on education funding. Beyond buying elections for extreme conservatives who have slashed education funding in their states, like Wisconsin Governor Scott Walker and North Carolina’s Thom Tillis, the Kochs have advocated for the abolishment of the federal Department of Education, and with it, all federal education funding. As the Kochs would have it, public education funds should be slashed and the opportunity to influence hearts and minds awarded to the highest bidder.

In case you’re somehow not yet convinced of the nefariousness of the Kochs’ self-serving YE endeavor, after yesterday’s Huffington Post report, a website with elements of the curriculum was unceremoniously deleted.