If the Koch brothers win,
working families lose.
The Koch brothers are trying to buy the mid-term elections to drive their self-serving agenda. Help us hold them accountable this year and beyond.
Real Koch Facts
Business Impact
North Carolina
Policy Agenda
Louisiana North Carolina Wisconsin
Consider this your Veterans Day reminder that the Koch brothers are using their dark-money “pro-veterans” front group — that actively works against veterans’ interests — to buy the 2016 election.
It’s no secret that Charles and David Koch use Concerned Veterans for America (CVA), their “veterans advocacy” front group, to promote their selfish, right-wing agenda. As highlighted in Bridge Project and Vote Vets’ joint-report, “The Vets Group That Fights Against Veterans,” CVA is, among other things, focused on pushing an anti-veterans plan to privatize the VA. And to be clear: VA privatization is not a popular idea — especially among veterans. Nearly two-thirds of veterans oppose the Koch-CVA plan to shift VA health care to a voucher system, according to a recent bipartisan poll. And almost 60% of respondents made it clear they wouldn’t support a candidate who supports the Koch’s VA privatization agenda. 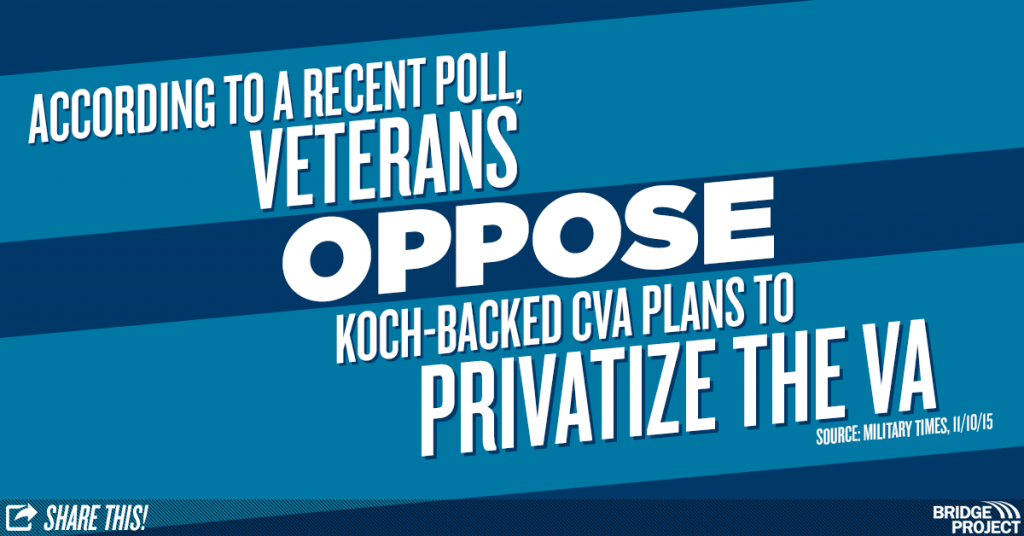 Charles and David must feel a profound sense of discouragement whenever their policies and candidates face that level of rejection. But that’s their day-to-day reality — the brothers waste hundreds of millions on candidates bought-and-paid to hawk the transparently selfish agenda and objectively unpopular Koch Agenda.
But Charles and David Koch aren’t ones to give up easily. Unable to promote their unpopular ideas in a positive manner, the Kochs resort to launching disingenuous attacks on their puppet candidates’ opponents. And that’s why CVA — ostensibly, a pro-veterans advocacy group — just bought $100,000 worth of digital attack ads.
CVA isn’t about promoting the interests of veterans. Like every other Koch-network front group, CVA’s all about the Kochs. The group’s primary objective is electing candidates who’ll prioritize Charles and David’s selfish agenda when it comes into conflict with the interests of the veterans they purport to care about.