This evening Senator Rand Paul will meet with the LIBRE Initiative at the College of Southern Nevada in Las Vegas. The LIBRE Initiative calls itself a “grassroots organization” that was created to “empower Hispanics” but it’s really a front group pushing the Koch brothers’ agenda.

Despite efforts to integrate into the Latino community, the Republican-operative run organization has a reputation for taking positions that will hurt Latinos and immigrants. Their executive director, Daniel Garza, has testified against President Obama’s protections against deportation. The front group also opposes raising the minimum wage and wants to repeal the Affordable Care Act, stances which will disproportionately affect the very demographic they say they represent. 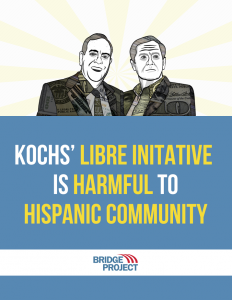