As top state conservatives gather in Harrisburg today and tomorrow for the Pennsylvania Conservative Leadership Conference, many of the speakers and attendees are featured in the Bridge Project’s new report, “The Kochstone State: How the Koch Brothers’ Growing Influence Is Hurting Pennsylvanians.” The report lays out how the Kochs fostered and orchestrated the current political environment with their copious campaign donations and funding a network of radical political groups to drive their extreme, self-serving agenda.

From the Kochs’ aggressive in-state lobbying to get taxpayer-paid subsidies for Georgia Pacific, to pressuring state leaders to try to block oil and gas regulations, while they enable and supply fracking companies that contaminate Pennsylvania’s air, drinking water, and farmlands, the Koch machine has disrupted health services, threatened school closures, while casting the most vulnerable Pennsylvania residents into the political maelstrom the Koch brothers created.

“This is what the Koch brothers do to serve their bottom line,” said Eddie Vale, the Vice President of the Bridge Project. “They don’t care if they put families, children, seniors, or people’s jobs at risk, as long as it feeds their profits.”

Documented in this report, Koch groups claimed victory after the Republican budget was forced on to Pennsylvanians earlier this week. Representatives from the Koch groups tweeted and remarked that the budget standoff was necessary to stop any increase in taxes, especially the new severance tax on natural gas production, and it also halted new regulations on gas and oil extraction.

At the federal level, the Kochs have propped up and installed politicians as key defenders of their billionaire agenda. A former board member of the Commonwealth Foundation, Sen. Pat Toomey has been a loyal champion of the Koch brothers’ causes. In the Senate, he has opposed raising the minimum wage, advocated for weaker environmental laws and for deregulation, and now is obstructing the judicial process along with his Republican leaders by refusing to do his job and fill the vacancy on the U.S. Supreme Court.

In the coming weeks as Gov. Wolf and the legislature resume budget proceedings for FY 2017, they must first dig out from a hole caused by the turmoil wrought by the Koch brothers.

For more information about the Koch-funded groups in Pennsylvania: 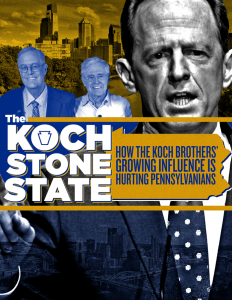