If the Koch brothers win,
working families lose.
The Koch brothers are trying to buy the mid-term elections to drive their self-serving agenda. Help us hold them accountable this year and beyond.
Real Koch Facts
Business Impact
North Carolina
Policy Agenda
Louisiana North Carolina Wisconsin
Today, Bridge Project is releasing a new report on the Koch brothers’ influence in the Show-Me State, called “Show Me The Money: The Kochs Fight Against Working Families In Missouri.”
As the 2016 election comes to a head, the billionaires aren’t slowing down the fight to protect their puppets at the cost of Missouri families. As Republican Senator Roy Blunt struggles in his fight for re-election, the Kochs are flooding Missouri with money in hopes of rescuing the vulnerable senator and Republicans across the state.
It’s unsurprising that the Kochs have a vested interest in the state. They have a combined 19 companies and subsidiaries active in Missouri, and they’ll do anything to protect their bottom line.
What’s in the Kochs’ best interest is rarely in working families though, and the Kochs have shown us repeatedly over the years they don’t care what or who they have to sacrifice on the way to bigger profits. That philosophy stands firmly behind their push to make Missouri a right-to-work-for-less state.
According to the report,

Americans for Prosperity proudly led a coalition of fifty-five organizations and organized a six figure media and ground effort to push Missouri legislators to weaken unions and collective bargaining. AFP attempted to deceive voters on the intentions of their efforts, as they promised this legislation was not “anti-union.” However, Missouri state representative and ALEC member Bill Lant, revealed the Kochs’ self-interest behind the campaign when he championed right-to-work “by projecting it would cut wages by 2 to 3 dollars an hour,” providing a boon to big businesses like Koch Industries. When the effort ended in a gubernatorial veto after a failed legislative override, AFP vowed the fight was not over and immediately went on the attack, targeting state representatives in misleading ad-buys. The Koch network has also pushed a broader assault on working families, fighting against prevailing wages, teachers’ job security and pensions. 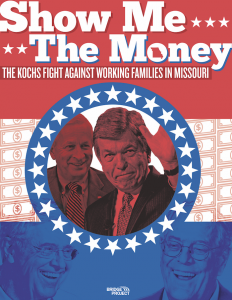