Throughout his career, Rob Portman has been an advocate of the Koch-promoted corporate interest agenda — supporting policies that facilitate outsourcing and corporate inversions — an agenda that benefits billionaires like Charles and David Koch at the expense of Ohio’s working and middle class families.

And now the Kochs are doing everything they can to ensure that Rob Portman — and their other puppet candidates — get reelected because they can’t afford to lose those who do their bidding in the U.S. Senate.

Earlier this week, the Koch brothers cut a $1.4 million slice of the $900 million they plan to deploy for the 2016 election to prop up Portman through attack ads from Koch front group Americans for Prosperity. 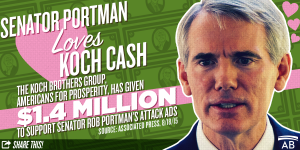 But that’s not the only Koch backing Portman is getting for his campaign.

To thank the Koch brothers for propping up his campaign, Portman will be a keynote speaker at this weekend’s Columbus summit sponsored by the Kochs. Without a doubt, in hopes they’ll spend millions more on his campaign, he’ll praise their agenda and make promises to move it forward — ignoring the simple fact that what’s good for the Kochs is bad for Ohio.