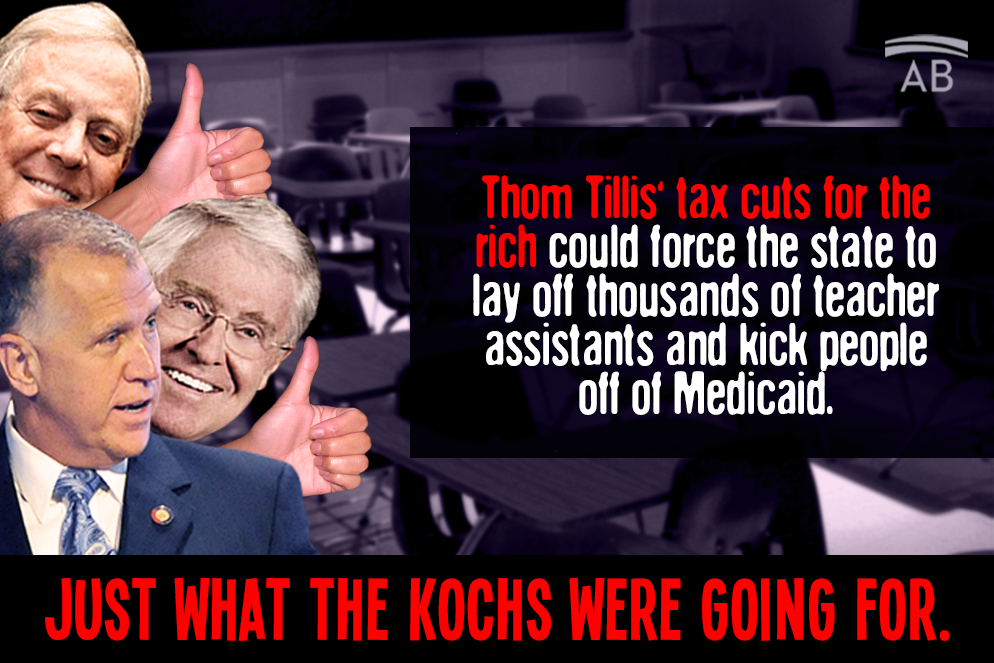 The love story of North Carolina’s Thom Tillis and the Koch brothers gets more epic by the day, now spanning multiple years and issues and with millions spent to cement their political union. Earlier this year, the Kochs’ political arm, Americans for Prosperity, even held a series of rallies proclaiming their admiration for Tillis and his extreme policies, most especially the tax breaks for the state’s uber-wealthy that he helped shepherd into law.

According to the Charlotte Observer, the initial 2013 wave of those tax cuts reduced state revenue this year by $500 million, possibly more. Last year’s Tillis budget also cut education funding by approximately the same amount. Faced with a teaching force whose pay ranks 48th in the nation, the state legislature is “struggling” to give its teachers a much-deserved raise, which would cost $400 million, according to the report. Thanks to the budget deficit caused by the tax breaks, all of the scenarios where teachers get a raise also entail laying off thousands of their teacher assistants and cutting back Medicaid assistance for working families in the state. All while the state’s wealthiest are enjoying a sizable tax break that’s scheduled to get even bigger on January 1, costing the state another $300 million.

The Observer implores Tillis and the legislature’s leadership to stay these further tax cuts in favor of education funding in the state. But the Kochs have so far gotten an excellent return on their investment in their partner Thom Tillis. Will he yet again choose the Koch brothers over the thousands of underpaid teachers in his state?