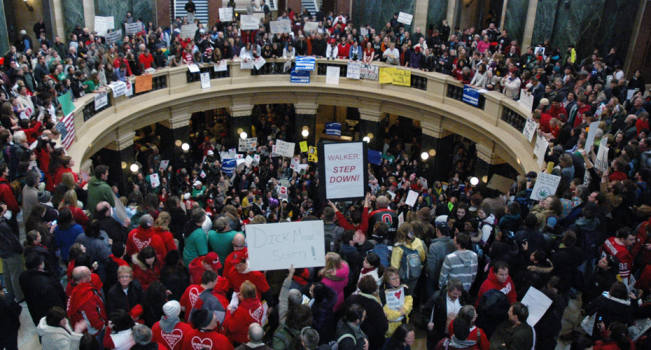 The Koch Brothers Were Major Supporters Of Walker’s 2010 Campaign. According to Mother Jones, “Wisconsin Republican Governor Scott Walker, whose bill to kill collective bargaining rights for public-sector unions has caused an uproar among state employees, might not be where he is today without the Koch brothers. […] According to Wisconsin campaign finance filings, Walker’s gubernatorial campaign received $43,000 from the Koch Industries PAC during the 2010 election. That donation was his campaign’s second-highest, behind $43,125 in contributions from housing and realtor groups in Wisconsin. The Koch’s PAC also helped Walker via a familiar and much-used politicial [sic] maneuver designed to allow donors to skirt campaign finance limits. The PAC gave $1 million to the Republican Governors Association, which in turn spent $65,000 on independent expenditures to support Walker. The RGA also spent a whopping $3.4 million on TV ads and mailers attacking Walker’s opponent, Milwaukee Mayor Tom Barrett.” [Mother Jones, 2/18/11]

Koch Industries PAC Contributed To 16 Winning Republicans State-Level Candidates In 2010. According to Mother Jones, “The Kochs also assisted Walker’s current GOP allies in the fight against the public-sector unions. Last year, Republicans took control of the both houses of the Wisconsin state legislature, which has made Walker’s assault on these unions possible. And according to data from the Wisconsin Democracy Campaign, the Koch Industries PAC spent $6,500 in support of 16 Wisconsin Republican state legislative candidates, who each won his or her election.” [Mother Jones, 2/18/11]

Americans For Prosperity President Tim Phillips Said AFP Spent $10 Million Promoting Walker’s Policies In 2011-2012. According to the Capital Times, “In 2011 and 2012, AFP teamed up with the MacIver Institute, a conservative think-tank, on an ad campaign promoting Walker’s policies. The Wisconsin Democracy Campaign, an election watchdog group, estimated that the ads cost $3.7 million. AFP President Tim Philips told CNN that his group spent $10 million in 2011 and 2012 promoting Walker’s policies.” [The Capital Times, 1/15/14]

Americans For Prosperity’s Mission Is “Educating” And “Mobilizing” Advocates Of “Limited Government And Free Markets.” According to Americans for Prosperity’s website, “Americans for Prosperity (AFP) is committed to educating citizens about economic policy and mobilizing those citizens as advocates in the public policy process. AFP is an organization of grassroots leaders who engage citizens in the name of limited government and free markets on the local, state, and federal levels. The grassroots activists of AFP advocate for public policies that champion the principles of entrepreneurship and fiscal and regulatory restraint.” [AmericansForProsperity.org, viewed 4/4/12]

AFP Wisconsin Bussed Wisconsin Residents To State Capitol To Support Walker Proposals. According to the New York Times, “Among the thousands of demonstrators who jammed the Wisconsin State Capitol grounds this weekend was a well-financed advocate from Washington who was there to voice praise for cutting state spending by slashing union benefits and bargaining rights. The visitor, Tim Phillips, the president of Americans for Prosperity, told a large group of counterprotesters who had gathered Saturday at one edge of what otherwise was a mostly union crowd that the cuts were not only necessary, but they also represented the start of a much-needed nationwide move to slash public-sector union benefits. […] The state chapter organized buses on Saturday for hundreds of Wisconsin residents to go to the Capitol to support the governor’s proposals.” New York Times, 2/21/11]

During 2011 Recall Elections, AFP Mailed Voters Absentee Ballots With The Wrong Date. According to Politico, “The conservative third-party group Americans for Prosperity said absentee ballot applications sent to Wisconsin voters this weekend with the wrong election date were the result of a ‘printing mistake.’ ‘The date on the ballot application was meant solely for the elections held on Aug. 16. Due to a mistake during printing, all applications were sent out with the Aug. 11 date,’ said AFP-Wisconsin state Director Matt Seaholm. ‘Americans for Prosperity-Wisconsin did not intend to print the incorrect absentee deadline or confuse voters in any way.’ The fliers from the advocacy group informed voters they should return ballots to their city clerk before Aug. 11 — even though the next election day is Aug. 9. The upcoming recall elections of six Republican state senators could flip control of the state Senate, as Republicans currently hold just a 19-14 majority in the chamber.” [Politico, 8/2/11]

AFP Spent Over $1.5 Million On TV Ads During Walker Recall Election. According to the Sunlight Foundation, “A limited picture of how much AFP is spending in the state comes from its TV buys. The Federal Communications Commission requires that local TV stations keep information about political ad spending in a public file. As of a month ago, when Gannett’s Wisconsin newspapers compiled data from the files, AFP had spent more than $1.5 million on ads in the state’s five biggest markets.” [Sunlight Foundation, 6/7/12]

Americans For Prosperity Launched Multi-City Wisconsin Bus Tour Days Head Of Walker Recall Election. According to Mother Jones, “This week, the Wisconsin chapter of Americans for Prosperity, the conservative nonprofit with ties to Charles and David Koch, launches a four-day, 10-city bus tour to ‘highlight the successes we have had in Wisconsin and lay the ground work for the challenges to come.’ AFP’s ‘A Better Wisconsin’ tour hits the road just days before the state’s hugely anticipated gubernatorial recall pitting Gov. Scott Walker against Milwaukee Mayor Tom Barrett, as well as four state Senate recall elections that will decide who controls the Senate. AFP has promoted its tour to state and national media, and no less than AFP national president Tim Phillips will be on hand to rally Wisconsinites. Given the tour’s timing and billing, any reasonable person would view it as a statewide drive to get out the vote for Walker and his GOP allies in the June 5 election. Not AFP. AFP’s Wisconsin director, Luke Hilgemann, says the bus tour has nothing to do the recall elections. ‘We’re not dealing with any candidates, political parties, or ongoing races,’ Hilgemann told the Hudson, Wisconsin, Patch news site. ‘We’re just educating folks on the importance of the reforms.’” [Mother Jones, 5/28/12]

Americans For Prosperity Wisconsin Was Subpoenaed In John Doe Investigation. According to the Wall Street Journal, “In recent weeks, special prosecutor Francis Schmitz has hit dozens of conservative groups with subpoenas demanding documents related to the 2011 and 2012 campaigns to recall Governor Walker and state legislative leaders. Copies of two subpoenas we’ve seen demand ‘all memoranda, email . . . correspondence, and communications’ both internally and between the subpoena target and some 29 conservative groups, including Wisconsin and national nonprofits, political vendors and party committees. The groups include the League of American Voters, Wisconsin Family Action, Wisconsin Manufacturers & Commerce, Americans for Prosperity—Wisconsin, American Crossroads, the Republican Governors Association, Friends of Scott Walker and the Republican Party of Wisconsin.” [Wall Street Journal, 11/18/13]