David and Charles Koch are turning states across the country into their own political playgrounds, using their billions to influence policy to suit their business and personal needs, and Colorado, where they own an Aspen mansion, is one of the most prolific examples. Together with their network of dark money groups, the Koch brothers are fighting to impose policies that fit their agenda while hurting middle-class Colorado families.

Today, Bridge Project is releasing a new report titled, “The Kochs’ Rocky Mountain High,” a comprehensive look at the impact of the Kochs’ operations in Colorado.

The Kochs treat Colorado as a personal, political, and business playground, but the games they play challenge the ability of Coloradans to govern their own state, put at risk the livelihoods of the state’s residents, and jeopardize the natural beauty that defines Colorado.

The report delves into: 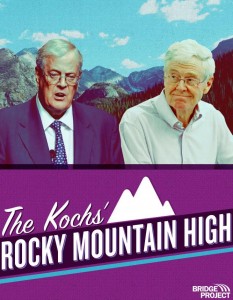