As Koch-backed Americans for Prosperity gathers for its 2015 national conference this weekend in Columbus, Ohio, Bridge Project is releasing a new report titled, “O-H-I-O Koch! Koch! Koch!: How The Kochs Have Polluted Ohio With Their Business & Politics.” The report is a comprehensive look at the impact of the Kochs’ operations in the Buckeye State.

Charles and David Koch recently announced they are on track to raise and spend almost $900 million — and have already spent over $1 million in Ohio — during the 2016 election cycle to push their candidates and policies, effectively giving their network parity with national political parties. However, the Kochs’ spending is not motivated by patriotic or civic duty – it’s driven by their bottom line.

Ohio is a prime example of the self-enriching relationship between Koch Industries and the Koch political network, which allows the billionaire brothers to use their political influence to advocate for state and local policies that benefit themselves at the expense of Ohioans. As Koch companies pollute Ohio’s air and water, Koch political groups’ advocacy against environmental safeguards, worker protections, access to health care, clean energy, and other policies hurts Ohio’s people, environment, and economy.

To highlight how Koch operations have impacted Ohio, Bridge Project is launching an Ohio-targeted digital ad campaign. Bridge Project will also be on the ground in Columbus highlighting how the Kochs — and their puppet candidates — hurt Ohio. 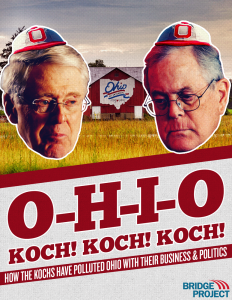