If the Koch brothers win,
working families lose.
The Koch brothers are trying to buy the mid-term elections to drive their self-serving agenda. Help us hold them accountable this year and beyond.
Real Koch Facts
Business Impact
North Carolina
Policy Agenda
Louisiana North Carolina Wisconsin
The Koch brothers have proved well-versed in every political game there is over the years, working to rig the system in their favor. Their latest trick is convincing the media and public that they are sincerely interested in reforming America’s criminal justice system. Their criminal justice PR stunt has already won them favorable headlines and charitable attributions.
Today, Bridge Project is releasing a new report on the Kochs’ PR push and greed-driven advocacy for criminal justice reform entitled, “Koch Advocacy For Criminal Justice Reform Is Driven By The Motivation To Protect Their Own Corporate Interests And Profits.” The report dives into the Koch initiative’s sinister roots.
The Kochs’ determination to grow their empire has meant shirking legal and moral codes repeatedly, leaving their businesses racked with plenty of violations. In the 1990s, four employees at a Koch refinery in Corpus Christi, Texas, were indicted on criminal charges for violating the Clean Air Act among other laws. The Kochs’ top lawyer, Mark Holden, who is now the face of their criminal justice reform campaign, argued that scrutiny of the criminal activity of Koch employees could have an “insidious” effect on company culture.
That incident hardly accounts for all of Koch Industries’ sketchy moves to up their profits, though. Over the years, Koch Industries has amassed multiple felonies, more than $90 million in fines and settlements for environmental violations, and lawsuits from workplace accidents that resulted in death or serious injury. In other words, Koch Industries itself would benefit from “banning the box” as they’ve also been fined for failing to check the box in the past.
Realizing they could get more bang for their buck without such infractions, the Kochs began their work on reforming the justice system — at least publicly. The Kochs have yet to put their money where their mouth is on this issue. While they regularly refuse to support candidates because of disagreement on issues like eliminating the Export-Import Bank, the Kochs don’t seem to care if their chosen politicians are “tough on crime” — repeatedly supporting Republicans who support the exact kinds of policies their criminal justice campaign claims to want to change.
The Kochs have never cared about what is morally right or wrong (or legally as we show in the report) — their actions to reform our justice system are entirely motivated by their bottom line.
Read the full report: 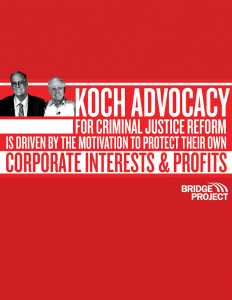