Why would the Koch brothers’ political network oppose an entity that fostered $28 billion in American exports and supported more than 160,000 domestic jobs in 2014? Because that cash wasn’t flowing to their entities. With congress set to reconvene in the coming weeks, the Koch network is again ramping up their opposition to the Export-Import Bank and twisting the arms of politicians who benefit from a steady flow of Koch-cash.

The Kochs’ opposition to the Ex-Im bank isn’t based in some lofty, idealistic opposition to so-called corporate welfare. Like everything the Kochs do, it’s based in self-interest. Read more here.

The export credit agency hasn’t been able to approve transactions above $10 million since it was reopened in December because its board doesn’t have a quorum, thanks largely to Senate Banking Committee Chairman Richard Shelby’s refusal to consider nominee Mark McWatters. But spending bills are now being considered by the House and Senate that would change the agency’s quorum rules and lift financing restrictions on the bank.

In a letter to Ryan (link below), Freedom Partners Chamber of Commerce Chairman Mark Holden said the Ex-Im amendment was “a blatant attempt to expand taxpayer-funded corporate welfare” that would “overwhelmingly benefit some of the largest and most politically connected companies in the world at the expense of America’s small businesses.” Read more here 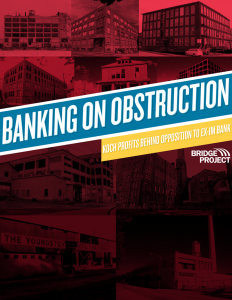