If the Koch brothers win,
working families lose.
The Koch brothers are trying to buy the mid-term elections to drive their self-serving agenda. Help us hold them accountable this year and beyond.
Real Koch Facts
Business Impact
North Carolina
Policy Agenda
Louisiana North Carolina Wisconsin
In a PR push, the Koch brothers are asking their political network to “ban the box” inside their companies.
The Kochs only became interested in criminal justice reform after executives at their companies were indicted for felony violations of environmental regulations. The Kochs’ underlying interest is changing mens rea laws so that corporate executives in their companies can avoid prosecution. Koch Industries has been convicted of felonies in state and federal courts and has to check the box the Kochs seek to ban.
Read more here 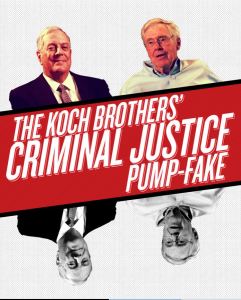