If the Koch brothers win,
working families lose.
The Koch brothers are trying to buy the mid-term elections to drive their self-serving agenda. Help us hold them accountable this year and beyond.
Real Koch Facts
Business Impact
North Carolina
Policy Agenda
Louisiana North Carolina Wisconsin
Today, a new report claims Marco Rubio could be the new “front-runner” for the billionaire brothers’ “big prize,” a piece of the nearly $1 billion they’ve promised to spend on the 2016 election.
From the New York Daily News:
According to a political insider who ran into David Koch at a recent event in Manhattan, Florida Sen. Rubio is the front-runner for [the Kochs’] dough now that Wisconsin Gov. Scott Walker is out of the race….We’re also told that Koch had nothing but nice things to say about Rubio, with whom he agrees on “most of the substantial issues.” 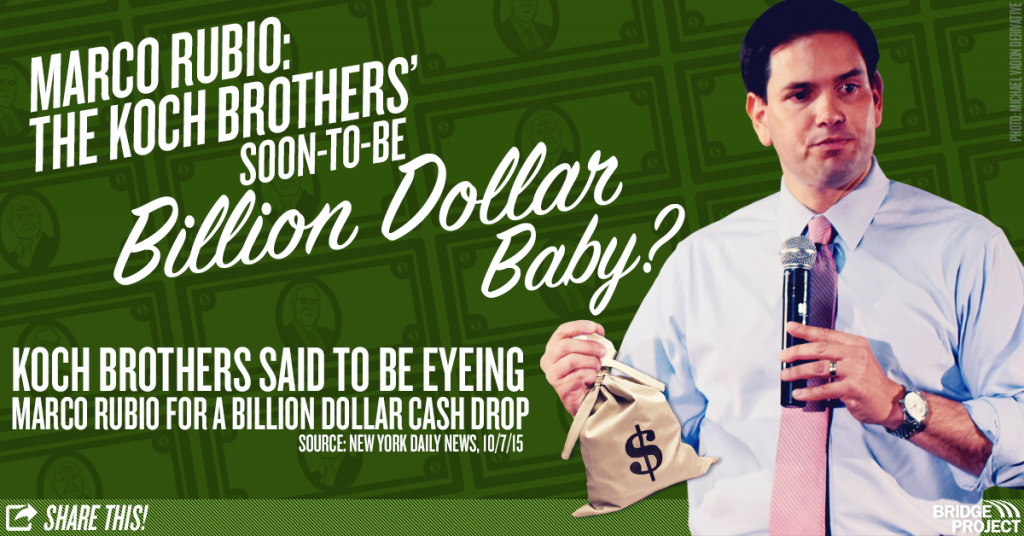 We’re sure Marco Rubio is jumping for joy that David Koch has finally noticed that on “most of the substantial issues,” Rubio is willing to toe the Koch line.
For months, Rubio has taken every available opportunity to show his deep allegiance to the Kochs’ “libertarian” causes in hopes they’ll spend big on his campaign. On issue after issue, Rubio’s been a strong supporter of the Koch agenda — opposing the Ex-Im Bank, fighting against net neutrality, blocking a raise to the minimum wage, opposing bankruptcy protections for Puerto Rico, and supporting tax cuts for rich special interests like the Kochs.
While other reports this week have said that Carly Fiorina is also on the Kochs’ “short list,” no matter who the eventual GOP nominee is — Jeb, Rubio, Carly, Kasich, or Cruz, they will be beholden to the Kochs and eagerly push the brothers’ self-enriching agenda that’s good for billionaires like them but hurts ordinary families across the country.