If the Koch brothers win,
working families lose.
The Koch brothers are trying to buy the mid-term elections to drive their self-serving agenda. Help us hold them accountable this year and beyond.
Real Koch Facts
Business Impact
North Carolina
Policy Agenda
Louisiana North Carolina Wisconsin
The Koch brothers are right-wing ideologues who put the profits of gun manufacturers ahead of common sense gun safety. Last week they deployed their network to belittle Democratic action to demand a vote on legislation widely supported by the American public.
As Democratic lawmakers engage in a Day of Action today to raise awareness of gun violence and demand legislative action, they’re sure to be greeted with push back from the Koch brothers’ political network.
Koch groups gave the NRA $6.6 million in 2012 and nearly $4.9 million in 2014 and the NRA worked with the Kochs’ Americans for Prosperity “to train and mobilize gun owners.” The Kochs’ relationship with the gun-lobby is detailed in Bridge Project’s new report, Marketing Death—How the Gun Industry Uses the NRA to Boost Profits and Undermine Public Safety.
The Koch network aggressively criticized last week’s Democratic sit-in with a uniform, erroneous message that Democratic lawmakers were attempting to destroy due process and dismantle constitutional rights.
CATO Institute employees revealed themselves to be civil rights experts last week; keeping with the Koch-message, they harangued Rep. Lewis for “restricting rights.” CATO went a step further than many Koch groups, ascribing bad motives to House Democrats claiming that they were, “Exploiting a tragedy to ram through a longstanding FBI wish list item that would have done nothing to stop Orlando“.
As we highlighted last week, CATO joined with other Koch groups (and Donald Trump) in arguing that the massacre in Orlando could’ve been prevented if the nightclub’s patrons had been armed.
Americans for Prosperity policy director Akash Chougule described the House sit-in as a “lame stunt” while also invoking the false claim that Democrats were seeking to weaken second and fifth amendment protections.
Generation Opportunity hit social media with it’s own strikingly tone-deaf hot takes during the Democratic sit-in. GenOpp Field Director Tyler Spires decided to lecture Rep. John Lewis on civil rights, deploying the patently false line that No-fly, No-buy strips due process. Spires concluded his lecture to Rep. Lewis by dropping a “bless your heart“, widely considered a derisive invocation in the South often directed at someone considered to be your intellectual inferior.
GenOpp also took the opportunity to (quite unbelievably) equate Social Security and being mugged at gunpoint in a regrettable social media campaign: 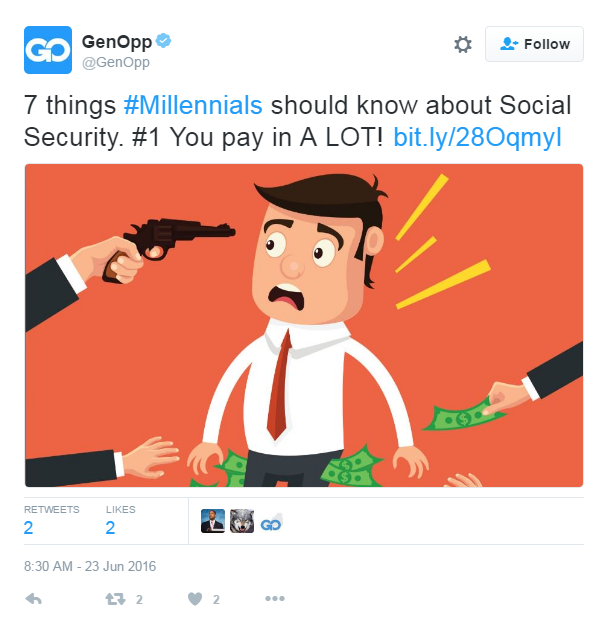 American Commitment‘s Phil Kerpen was perhaps the Koch ally most vehemently opposed to the House Democrats sit-in. No words except his own can do true justice to the levels of indignation felt by Mr. Kerpen: 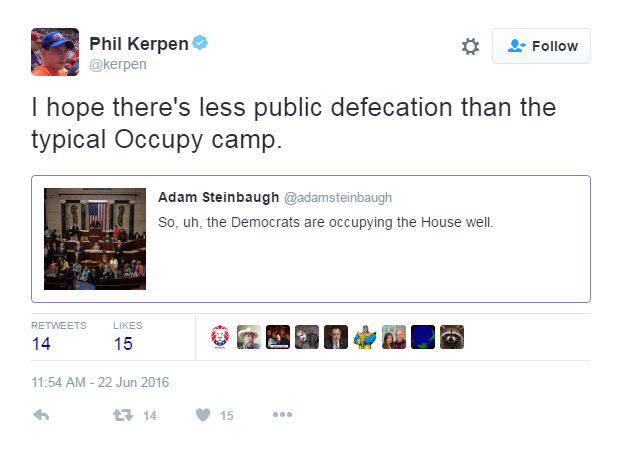 Quite laughably, after suggesting that the gun safety sit-in was an “Undemocratic breach of decorum,” that was “not supposed to happen in this country“, Kerpen helpfully pointed out that House Republicans actually pioneered the tactic in an attempt to expand oil exploration in ANWR in 2008.
Aside from outlandish rhetoric, American Commitment has opposed legislation preventing gun sales to people on the terrorism watch list. Despite the inclusion of an appeals process in most “No-Fly, No-Buy” proposals, Kerpen–in line with the Koch narrative–erroneously claimed that such legislation lacks due process.