If the Koch brothers win,
working families lose.
The Koch brothers are trying to buy the mid-term elections to drive their self-serving agenda. Help us hold them accountable this year and beyond.
Real Koch Facts
Business Impact
North Carolina
Policy Agenda
Louisiana North Carolina Wisconsin
It’s not just presidential candidates who are putting in more time in Nevada. As the Silver State’s political capital increases, so does the Koch brothers’ interest in investing. The billionaire brothers have long appeared to have money to burn, and what better place to strike it rich (again) than the home of Las Vegas? After all, the Kochs were never going to sit back and let Sheldon Adelson have all the fun — it’s not in their nature.
Today, Bridge Project is releasing a new report entitiled, “Koch Rush In The Silver State,” a deep dive into the Koch brothers’ efforts to gain political control of Nevada. The combined draw of natural resources and favorable tax policies brought Koch Industries to the state. Now, just as they’ve done in states across the country, the Kochs are using their massive wealth to rig Nevada in their favor.
Through the State Policy Network’s Nevada Policy Research Institute (NPRI), the Kochs have had political sway in the state for some time. The Kochs have endowed huge amounts to NPRI to ensure they push policies that are in line with the Koch agenda (read: their bottom line). NPRI has been particularly helpful with the Kochs’ interest in buying up public lands by pushing for the transfer of lands to state governments, which could then sell them to private entities such as Koch Industries.
More recently, the Kochs have increased their involvement by expanding their network with front groups such as Americans for Prosperity, Concerned Veterans for America, and the LIBRE Initiative. Recognizing the growing power of the Hispanic and Latino electorate, especially in Nevada, the Kochs’ LIBRE Initiative bills itself as a grassroots organization that advocates for the Latino community. In actuality, LIBRE are at the beck and the call of the Kochs, pushing policies that hurt the very people they say they help.
The Kochs’ action in Nevada has rightly earned them one of their best known critics, Senator Harry Reid. The Kochs have long had Reid in their crosshairs, spending millions to unseat him in 2010 and already boosting U.S. Representative Joe Heck’s bid to replace him in 2016.
Bridge Project’s latest report covers all of this and more.
Read the full report here: 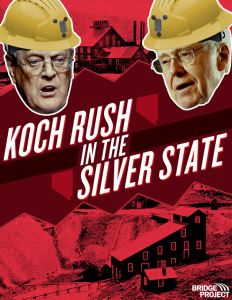