If the Koch brothers win,
working families lose.
The Koch brothers are trying to buy the mid-term elections to drive their self-serving agenda. Help us hold them accountable this year and beyond.
Real Koch Facts
Business Impact
North Carolina
Policy Agenda
Louisiana North Carolina Wisconsin
There’s a lot at stake tonight for the eight Republicans at the main stage debate in Las Vegas, but they aren’t the only ones betting on a good showing in Nevada. The Koch brothers are also upping the ante in the Silver State. The billionaire brothers have long appeared to have money to burn, and what better place to strike it rich (again) than the home of Las Vegas? After all, the Kochs were never going to sit back and let Sheldon Adelson have all the fun — it’s not in their nature.
Earlier this year, Bridge Project released a report on the Kochs’ efforts to gain political control of Nevada entitled, “Koch Rush In The Silver State.” The combined draw of natural resources and favorable tax policies brought Koch Industries to the state. Using their massive wealth, the brothers are doing everything they can to rig Nevada in their favor:
Expanding Their Political Network
Rep. Joe Heck’s Bid To Replace Senator Harry Reid
Nevada Policy Research Institute (NPRI)
Read the full report here: 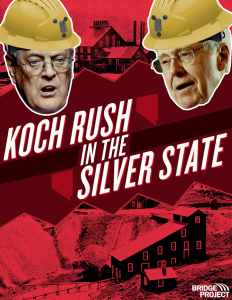